Prior to completing her J.D. with Distinction (2015) at the University of Alberta, Andrea obtained a B.A. (First Class Honors) in Drama at the U of A and received an Alison White Honors award for having the highest GPA in the Faculty of Fine Arts. Called to the Alberta bar in 2016 and the Northwest Territories bar in 2018, Andrea is a civil litigator, with a focus on debt collection and foreclosures. She has appeared at all levels of Court in Alberta and regularly volunteers with Pro Bono Law Alberta.

During her time in law school, Andrea was on the Editorial Board of the Alberta Law Review and was the Theatrical Director of Law Show 2015 (Harry Lawter). Andrea is a recent cast member of Players de Novo, having appeared as Hermia in A Midsummer Night’s Dream in May 2016.

Andrea is a fan of Margaret Atwood, the YEG food scene, indie music, her husband, and their young family. 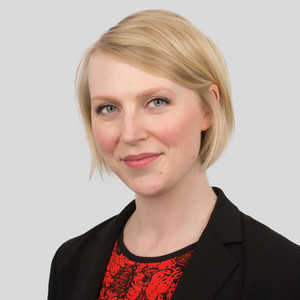